Castor Oil composititon and its uses

Castor oil is a vegetable oil obtained by pressing the seeds of the castor oil plant.The common name "castor oil", from which the plant gets its name, probably comes from its use as a replacement for castoreum, a perfume base made from the dried perineal glands of the beaver.

Castor oil is a colorless to very pale yellow liquid with a distinct taste and odor once first ingested. Its boiling point is 313 °C (595 °F) and its density is 961 kg/m3. It is a triglyceride in which approximately 90 percent of fatty acid chains are ricinoleates. Oleate and linoleates are the other significant components. 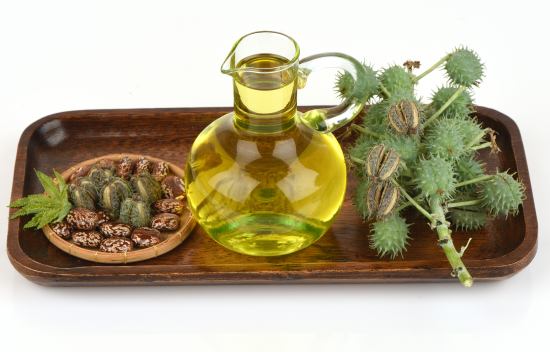 Structure of the major component of castor oil.

The chemical reactivity of the alcohol group also allows chemical derivatization that is not possible with most other seed oils. Because of its ricinoleic acid content, castor oil is a valuable chemical in feedstocks, commanding a higher price than other seed oils.

In the food industry, castor oil (food grade) is used in food additives, flavorings, candy (e.g., polyglycerol polyricinoleate or PGPR in chocolate), as a mold inhibitor, and in packaging. Polyoxyethylated castor oil (e.g., Kolliphor EL) is also used in the food industries.

In India, Pakistan and Nepal food grains are preserved by the application of castor oil. It stops rice, wheat, and pulses from rotting. For example, the legume pigeon pea is commonly available coated in oil for extended storage.

The United States Food and Drug Administration (FDA) has categorized castor oil as "generally recognized as safe and effective" (GRASE) for over-the-counter use as a laxative with its major site of action the small intestine where it is digested into ricinoleic acid.Despite castor oil being widely used to induce labor in pregnant women, to date there is not enough research to show whether it is effective to ripen the cervix or induce labor.Therapeutically, modern drugs are rarely given in a pure chemical state, so most active ingredients are combined with excipients or additives. Castor oil, or a castor oil derivative such as Kolliphor EL (polyethoxylated castor oil, a nonionic surfactant), is added to many modern drugs, including.

Castor oil is used as bio-based polyol in the polyurethane industry. The average functionality (number of hydroxyl groups per triglyceride molecule) of castor oil is .so it is widely used as rigid polyol and coating.

Castor oil is not a drying oil, meaning that it has a low reactivity toward air compared to other oils such as linseed oil and tung oil. Dehydration of castor oil gives linoleic acids, which do have drying properties.

Castor oil can be broken down into other chemical compounds that have numerous applications.Transesterification followed by steam cracking gives undecylenic acid, a precursor to specialized polymer nylon 11, and heptanal, a component in fragrances. Breakdown of castor oil in strong base gives 2-octanol, both a fragrance component and a specialized solvent, and the dicarboxylic acid sebacic acid. Hydrogenation of castor oil saturates the alkenes, giving a waxy lubricant.

The production of lithium grease consumes a significant amount of castor oil. Hydrogenation and saponification of castor oil yields 12-hydroxystearic acid which is then reacted with lithium hydroxide or lithium carbonate to give high performance lubricant grease.

Since it has a relatively high dielectric constant, highly refined and dried castor oil is sometimes used as a dielectric fluid within high performance high voltage capacitors.

Vegetable oils like castor oil are typically unattractive alternatives to petroleum-derived lubricants because of their poor oxidative stability.Castor oil has better low-temperature viscosity properties and high-temperature lubrication than most vegetable oils, making it useful as a lubricant in jet, diesel, and racing engines.The viscosity of castor oil at 10 °C is 2,420 centipoise.However, castor oil tends to form gums in a short time, and therefore its usefulness is limited to engines that are regularly rebuilt, such as racing engines. The lubricants company Castrol took its name from castor oil.

Castor oil has been suggested as a lubricant for bicycle pumps because it does not degrade natural rubber seals.

World War I aviation radial engines used castor oil as a primary lubricant, mixed in with the fuel.

Castor oil was the preferred lubricant for radial engines, such as the Gnome engine after that engine's widespread adoption for aviation in Europe in 1909. It was used almost universally in radial engined Allied aircraft in World War I. Germany had to make do with inferior ersatz oil (a German term for alternative, substitute, replacement) for its radial engines, which resulted in poor reliability.

The methanol-fueled two-cycle glow plug engines used for aeromodelling, since their adoption by model airplane hobbyists in the 1940s, have used varying percentages of castor oil as a lubricant. It is highly resistant to degradation when the engine has its fuel-air mixture leaned for maximum engine speed. Gummy residues can still be a problem for aeromodelling powerplants lubricated with castor oil, however, usually requiring eventual replacement of ball bearings when the residue accumulates within the engine's bearing races. One British manufacturer of sleeve valved four-cycle model engines has stated the "varnish" created by using castor oil in small percentages can improve the pneumatic seal of the sleeve valve, improving such an engine's performance over time

Turkey red oil, also called sulphonated (or sulfated) castor oil, is made by adding sulfuric acid to vegetable oils, most notably castor oil.It was the first synthetic detergent after ordinary soap. It is used in formulating lubricants, softeners, and dyeing assistants.

Castor oil, like currently less expensive vegetable oils, can be used as feedstock in the production of biodiesel. The resulting fuel is superior for cold winters, because of its exceptionally low cloud and pour points.

Initiatives to grow more castor for energy production, in preference to other oil crops, are motivated by social considerations. Tropical subsistence farmers would gain a cash crop.